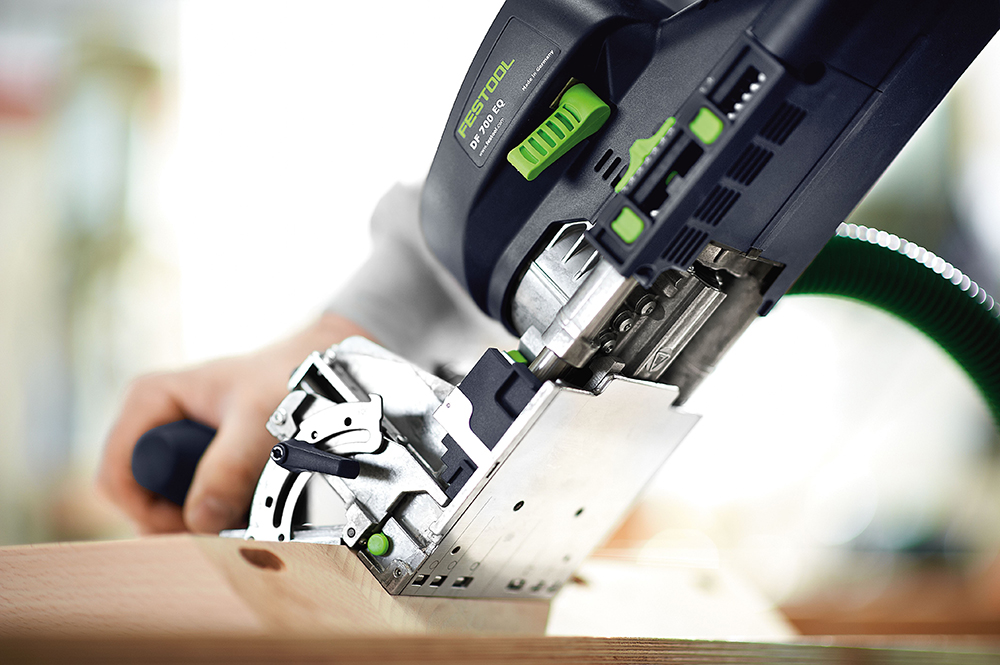 Saturday September 26 2015 In Design By handsomeandco

When I was studying furniture making the domino cutter didn’t exist, in fact, if I’m to believe Wikipedia it was only released for sale in 2007, the very same year I graduated from study. So in other words, the year I finished my four long and challenging years of training in the art of fine furniture making, woodworking got easier.

This tool, first on sale in 2007, cuts mortises in the manner of a biscuit joiner. A drill-like rotating cutter cuts a round-ended mortise. Each plunge creates a mortise that is sized to accept a Domino loose tenon, creating joints in stock from 22.2 millimeters (0.87 in) wide. There are five cutter sizes (4 mm, 5 mm, 6 mm, 8 mm and 10 mm) for six different Domino tenon sizes. Self-referencing pins allow the cutting of rows of evenly spaced mortises with no need to measure and mark. Mortise width is adjustable in three increments with the turn of a knob, and cuts can be overlapped for long mortises. Fence tilts from 0-90°, with stop positions at 0°, 22.5°, 45°, 67.5°, 90°.

At some point in my study, I fell deeper in love with woodworking (deeper than I already was prior to study). Which I guess is attributed to a number of things; more knowledge, pursuit of quality, the refinement of skill and the challenge involved in all aspects of the craft. When the Festool domino cutter came along, it simplified woodworking and subsequently revolutionized it and now, it has become a staple in all workshops. It’s in the removal of the ‘challenge’ and the loss of ‘skills’ required in achieving high quality joinery that makes me feel uneasy and why do I feel uneasy? Because the woodworking that I love is and has changed.

Maybe these are the scrawling’s of Luddite, scared of the advancement his trade or maybe I’m just nostalgic for a time gone by. But the truth is a ‘Domino cutter’ is a dumb* tool and it makes woodworking dumb*, which means anybody can pick it up with little or no prior instruction and use it with as much competency as the next person or even an experienced furniture maker. This simplicity lends itself to its success and it is one of the many great qualities of the machine, thus offering speed, accuracy, versatility and repeatability.

So here’s my confession… I own a domino cutter and it’s a great tool, especially for commercial work. What I’m trying to say is, while the domino cutter could easily replace all your joinery, tempting you with its speed and ease, I urge you, to not forget the advantage and attraction for the variety of traditional timber joints and the hand skills required to cut them. Yes, these types of joinery are hard to cut and even harder to get right, but what they offer over a Domino cut mortise is a sense of satisfaction only achieved after a challenge or mastery of skill (which usually takes ages). Even more simply put, learn to walk before you run.

So to conclude, I’m not saying not to rush out and buy a domino cutter, nor am I saying to buy one. What I am saying is that the Domino cutter should co-exist with traditional woodworking and it is up to the maker to decide on the appropriate balance between modern and traditional woodworking methods and most importantly, don’t be dumb, remember to practice your hand skills.

*In this context “dumb” meaning without prior knowledge or skill.