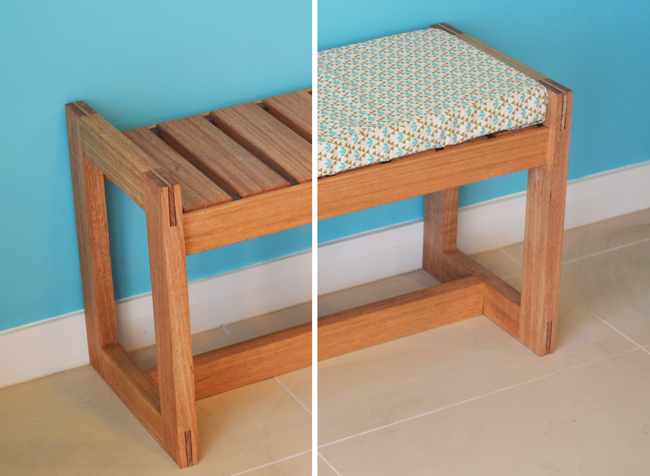 Monday December 15 2014 In Education By handsomeandco

The project that I designed and constructed at Handsome & Co. (Thursday night class) is a piano bench. There are open bridle joints on each corner, and mortise and tenon joints on the cross rails and gate leg. On the top are champhered slats with contrasting pieces of walnut. It’s made of Tas Oak, which when I first bought it looked much grottier.  Someone at work had asked me if it was firewood. I enjoyed the transformative process of cleaning the wood up. It was also very satisfying to get the end point of the project where everything fitted together – other people in the class seemed surprised when the bench finally looked like a ‘thing’. Before that, I always knew what it was going to be, but it was a matter of bringing it to reality. 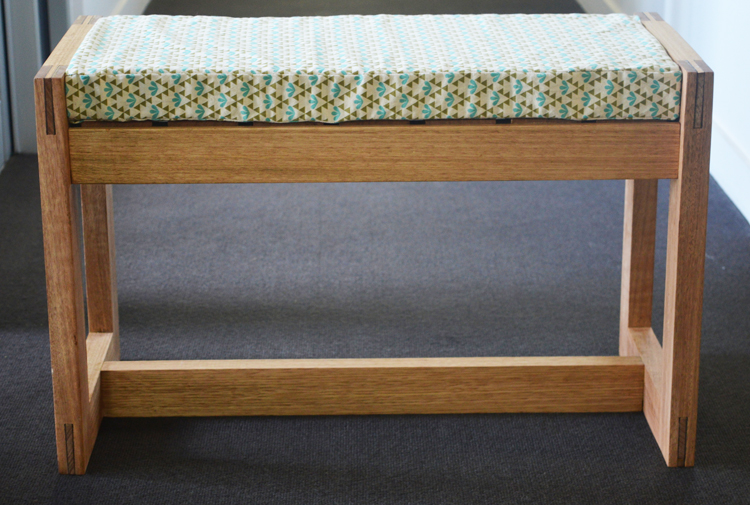 I thought the bench would take me one semester, but instead it took two. One with Elliot, one with Sean. There seem to be three rules to making furniture the ‘fine’ or what I call ‘fancy’ way. One, everything takes longer than you think – maybe two or three times as long.  I’m embarrassed that it took so long to make but that also reminds me how long it would have taken without tutoring, tools, and turning up to class every week (or most weeks). The second rule is that the most guaranteed way to ruin something is to hurry. Impatience and wood do not mix. The wood seems to physically sense hurry and commit suicide in small but excruciating details.  Better, though, the wood than your fingers. My woodwork teacher at high school had several fingers missing and my main memory of those classes is the stories about what each machine could do to you and your bodily extremities. 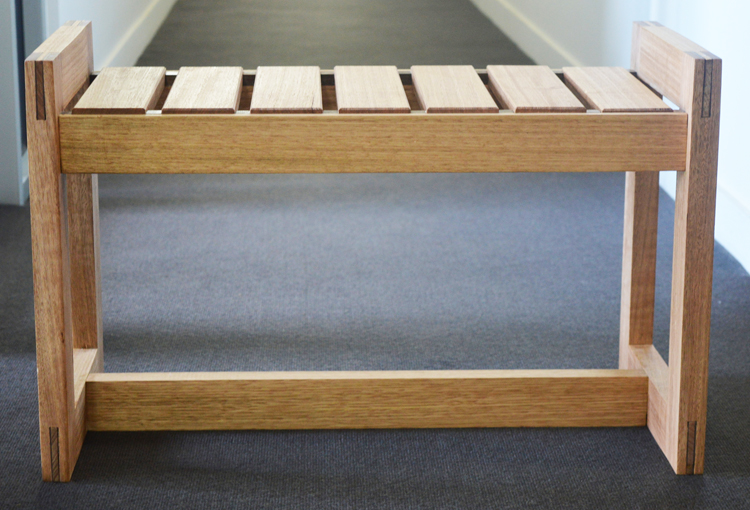 The third rule is that furniture making is all about tiny measurements – not just millimetres but portions of millimetres.  Demonstrating all three points, a key disaster in my project was that I cut the tenons for the bridle joint on the wrong side of the bandsaw – meaning I took nearly 2 millimetres too much off the tenon, thereby making it too small for the mortise. Disaster! Elliot’s idea was to put a contrasting wood inside the joint to pad it out.  I spent most of one class gluing several layers of purple heart veneer onto the tenons. This was like making small, sticky, toasted sandwiches. In the end the contrast of timbers on the exposed joints is a real feature and looks like it was planned that way.

Some of the shape for the project I took from a coffee table design in a book (“Wood Work”, DK publishing) but the joinery and bench aspect I adapted to what I wanted. It’s great to be able to make something the exact size and look that you want. I also (with help from my mother in law) made a matching cushion to size. Overall I am very happy with the way the project worked out, although the small flaws are distracting (to me). The piece has made itself at home already and I have gained confidence to – slowly – make another piece of furniture.